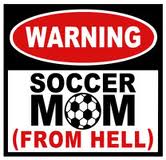 People who volunteer to coach youth sports do not get the credit they deserve.  Most of the stories you read about youth sports coaches involve pedophilia or fanatical nut jobs who care nothing about sportsmanship or the children, they only care about winning.


I have been involved as a coach three times in my life.  I did not volunteer so much as I failed to take two steps backwards as quickly as the other parents at the meetings.  I was coach of two different seven year old soccer recreation teams (about twenty years apart) and a nine year old Little League baseball team.


I would like to use my forum here to blast the real culprits in harming children through youth sports….PARENTS!


In case you did not hear let me make it clear; annoying busybody do nothing drop the kids off so you can babysit piece of crap freaking parents are the trouble with youth sports.


The worst of the parents are soccer moms (and dads).


My first experience with coaching was for a soccer team of seven year olds. One soccer mom was unable to drive her daughter to and from practice and games.  I picked up this little girl for all practices and games.  I was never thanked for this…that was fine; I felt sorry for the little girl because of her mom was a little…er….WEIRD!


All season I was this little girl’s chauffer.  We finished the season, and the next Saturday was the annual soccer picnic.  The girl’s mother came up to me at the picnic furious that I did not pick up her daughter for practice on that Thursday.  I explained to her that since the season was over last Saturday, it would seem silly to hold the usual weekly practice on this past Thursday.


Twenty years later I again forgot to step backwards and was coaching another seven year old soccer team.  I did not mind that kids seldom made practice and showed up for games ten minutes late; I did mind that parents of these kids expected the same playing time for their kids as the ones that showed up on time.


The parents always knew to the minute who played more than their child.


These games were four eight minute quarters.  Each team had ten kids.  You could only field six at a time.  Every kid wanted to play goalie, or forward, or only on defense.  Few of the children were accustomed to not getting what they wanted.  Coaching became almost completely trying to monitor who played where and for how long.  It was VERY important that everything be equal.  Screw teaching the kids how to play the game.


One game I apparently failed to put one little boy in the game an equal amount of time as the rest of the children.  His mom and dad let me know very loud and clear.  I was accused of holding him out and playing better players so we could win the game (We didn’t even keep score so as not to damage the little precious children’s self esteem).


I was attacked in such a way I really had only one of two choices.  Pop the kids obnoxious dad in the chops (I would never hit the mom) or walk away.  I walked away.


The next week I intentionally played this kid an extra quarter and held my own son out.  I did this to make a point.  The dad attacked me again.


“I know what you’re doing, playing my son extra just because I complained.  That’s not fair either.”


I stepped back and told this dad,

“Last week I elected to walk away from your inappropriate tantrum instead on knocking you on your ass.  I am beginning to see what a bad decision that was” (well something to that effect.)

My assistant coach stepped between us before I corrected the previous week’s decision and another parent suggested this gentleman back off….quickly.


I did get an apology from the wife over the phone.  I accepted, but none too graciously.

Too be continued tomorrow- Sam Shapasshole and Little League Baseball.