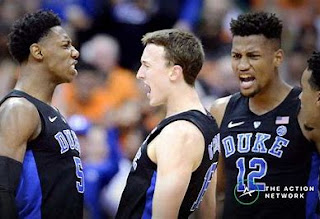 Friday night I was watching the Duke sweet sixteen NCAA basketball game between Duke and Virginia Tech.  It was a great game, back and forth for 39 minutes 59 seconds.  With one second left it was still anyone’s game.


I am not a big basketball fan.  I seldom watch the pro’s and mostly just watch college during March Madness.  Even then I don’t watch much.  Any sports can be boring without a rooting interest.


When Duke plays, I have a rooting interest.  I have a few friends and a whole bunch of relatives that graduated from Duke.


So, for several hours, I was watching this basketball game Friday night.


Mrs. C was downstairs catching up on “Game of Thrones.”  She has no interest in most sports, but she does not begrudge me my watching and rooting.


I was watching Duke, on the edge of my seat for several hours, and the game came down to the final 1.1 second.  Duke was leading by two points.


Virginia Tech had the ball and was preparing an inbounds play.  They had enough time to catch an inbounds pass and shoot.  It is enough time, especially as the defense has to be extra careful not to foul.  Based on games I have watched, VT had about a 25% chance of tying the game and a slight chance of scoring a three-point play and winning.


During a time out to set up a play and a defense, I heard Mrs. C coming up the stairs.


As Vt was in-bounding the ball, and as she sauntered in front on the TV,


I screamed frantically while gesticulating with my arms for her to move.


I saw the pass to a VT guard right below the basket.  He caught it and while in mid air tapped it toward the basket.  At that moment, Mrs. C moved between me and the TV and there was a one second total eclipse of the game.


I heard that Duke won the game.  Apparently, the final shot missed and there was no foul.  It must have been an exciting moment.


Wished I would have seen it.
Oh well, they lost on Sunday...dang!