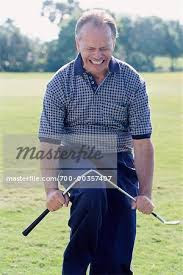 So I played golf today.  I usually just go out by myself and if it is busy get paired up with other golfers.  Today I was paired up with three old geezers.  Well two of them were 76 and one, Tim, was 87, so at 75 I was the youngest and I called them old geezers.

The 87 YO had a deformed right hand, I believe from polio and was recovering from an operation which relieved a nerve situation.  He weighed maybe 110 pounds, and he hit his drives from 190 to 230 yards.  Pretty damn good for an 87 YO man with a deformed right hand.  He probably scored under 100.

Pretty damn good for anyone over 65.

Tim was a bit on the salty side and he regaled me with stories of his youth caddying during WWII at age 12, earning .25 a round carrying bags.  If he found a ball, he could sell it for more than he earned hauling the bags around.  Apparently during the war, golf balls were not a priority and they were hard to come by.

Tim was full of bad jokes, most dirty and many highly socially incorrect.  I love it when someone says,

“I’ve got a good joke for you…you’re not Jewish, are you?”

I mean, if I was Jewish, I’d already be insulted just because you had a joke that you knew was offensive to anyone that was Jewish.  Actually, the joke was not really offensive to Jewish people, it was mostly offensive to Gay people.  It was also just corny, but hey the dudes 87 and he’s gone through some stuff in his life, he’s not about to turn all politically correct at this point.  I also don’t really think Tim has an actual mean or racist bone in his body.

What really struck me about Tim and what I consider to be a life lesson, was that even at 87, golf was able to get the better of him from time to time.

Because, it really doesn’t matter.  It’s just a game, it’s just one bad shot, it won’t make the evening news,

“This just in, Tim hit a really bad golf shot on the 7th hole, took an 8 ruining a good round.”

No, it never makes the evening news because it is not important, except that for one split second, the game gets the better of even an 87-year-old man with a deformed hand, and it seems very important.

Then he realizes he is never going to make the PGA tour, even the senior circuit, and he remembers that it is a pretty great thing that he can play 18 holes of golf with a bunch of young 76-year-olds, pee in the woods, tell dirty jokes and hit a golf ball 230 yards (ok, once).

Maybe in 12 years, I too will learn to not let a crappy shot fester, and just move on to the next shot.