Crime in the USA

Crime in the USA

Sometimes I just need to rant! 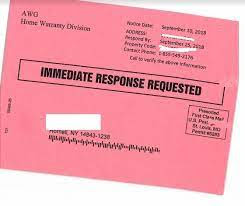 Crime is on the rise in the USA.  There are many reasons for this, but it is complicated.  I have no answer.  Murders, muggings, carjacking and shop-lifting are now often right out in the open, filmed by passers-by with their ubiquitous i-phones.  Apparently they can’t be stopped, or maybe no one cares.

Scary stuff to be sure, but the crime that has me the most up in arms, maybe that is a poor choice of words, that has me the angriest, that I care about, are the crimes specifically aimed at old people.

Actually, I guess they are not crimes.  Apparently, it is completely legal to lie to old people and use terms that scare the crap out of old people all to have old people pay for things that are legal but not worth shit!

I recently received a FINAL NOTICE, of my LAST CHANCE, failure to call could COST ME THOUSANDS OF DOLLARS.  CALL IMMEDIATELY, this is our FINAL ATTEMPT TO NOTIFY YOU.  RESPOND BY 07/09/2021 (today).

It looked very official and it must be real as it came from came from my home mortgage holder, Sovereign Bank.

It was my last chance to purchase home warranty insurance.

One wonders, why would a company have a last chance to buy their product?  Like if I responded a week later they would say, "I'm sorry, you are too late, the offer to buy our product expired."

This insurance would save me thousands on repairs or replacement of my heating and cooling system, appliances, electrical systems and plumbing.

It is not a question of if these things would go bad, BUT WHEN!

It has to be legit as it came from my mortgage holder, Sovereign Bank.

Actually, I don’t know who holds my mortgage.  As soon as anyone gets a mortgage these days, it gets sold to another party, and often sold, bundled and sold again.  I guess my mortgage could be from Sovereign Bank.  Except that Sovereign Bank does not exist.  It was sold to Santander Bank in 2013.

What is the name of this Home Warranty company?  What do you know, they don't say!

I almost called the provided number to bust their chops, but I realized they don’t care.  They don’t need my money; they prefer to take it from scared older people who don’t know any better.  People who have money, are weak, and are afraid of government, banks and any entity with power.

These people are selling crap through fear.  Call me a sceptic, but I suspect any insurance sold that references a non-existent bank, probably would not make good on any insurance claims. I’m pretty sure they would have a loophole that might actually cost the claimant more money than if they did not make a claim at all.

I would like to see government crackdown on these scumbags.

Maybe they can’t stop mugging, carjacking, murder and shoplifting, but emails, phone scams, and scare letter muggings of the elderly and or the very stupid can and should be stopped.

These jack-holes do their mugging in the open, they leave tracks with phone numbers and email addresses.  They hide behind a cadre of lawyers and loopholes.  Well, government has lawyers too and government can also be ruthless when they want to.  So come on government, flex your muscles on these really bad people, and this is CLEARLY FRAUD!!

Track them down.  Lock them up.  Expose them, fine them, march them through the streets in chains for old people to spit on them, throw tomatoes at them and call them names.

Heck they could charge admittance for that parade to help recoup the money stolen from old people.

How do these people sleep at night?