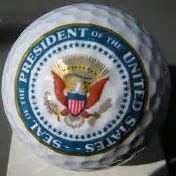 I’m going to steal another story from my brother, Chris, the retired Judge.  I’m stealing it because I like the story, I’m running low on material, and he doesn’t have a blog so why not?

Years ago, before Chris was nominated for a Federal Judge Position by President Clinton, he was nominated by the first George Bush.  That nomination never went through the confirmation process because a Mr. Joe Biden held it up until after the election won by Bill Clinton, at which point it was buried.  It seems as if that political game has been going on for a long time.
A year or so later, before his successful appointment, Chris was playing golf with his wife and other friends when the secret service asked them to hold up and let ex-President Bush play through.
My brother introduced himself to the ex- President and brought up his disappointment that President Bush’s appointment never went to review.  President Bush commented that the election did not work out so well for himself either.
President Bush then handed a golf ball to Chris’s wife.  A golf ball embossed with the Presidential seal…very cool.  My sis-in-law, Stewart, then handed that ball to another member of their foursome.
When Chris realized she had given this special ball away he was noticeably upset.  Stewart said, “Not to worry,”
She went up to the ex-President as he was about to tee off and with her best Georgia southern charm (and she has plenty of that charm), asked,
“Mr. President, I wonder if you would trade another of your Presidential Seal golf balls for a brand new Titleist One ball?”
Now, it would have been very cool if the President had just given out one more special Presidential Seal golf ball for the asking, but for some reason I think it extra cool that the President gladly accepted the Titleist One ball in trade.
The golf ball with the Presidential seal currently has a special place in my brother’s trophy case.
I suspect the Titleist One that was given in trade is somewhere on the bottom of a golf course lake.
Posted by joeh at 8:42 PM