OLD FRIENDS
I first met Frog in 1961, our sophomore year in high school.  He was a manager on the high school football team, I was a third string guard on the Varsity team.  We did not talk much.
The next year, I was a second-string guard, Frog was the head manager on the football team.  If you want to know who is more valuable to a football team, a second-string guard or the manager, ask the Head Coach…the manager wins.  We did not talk much.
The next year, I was the starting guard and Co-captain.  If you checked with the Head Coach, the manager was still the more important man on the team.  We still did not talk much.  I did once ask for a new pair of shoe laces and Frog said no.
“I’m friggin Co-captain and I can’t have shoe laces?”
“Coach says we’re running low.”
I hated Frog.
The next year I went to college and Frog went to the same school.  I bumped into him, he was rooming on the floor just below me.  We talked a lot.  We have been close friends ever since.  He still would not give me a pair of shoe laces if I asked…the shirt off his back, but not laces, it is a matter of principle.
That was 54 years ago, and we are still friends.  He has tried to get me to learn to fly fish with very little success.  I have tried to teach him to play golf with limited success.  We have shared more than a drink or two, we even shared a bed once, separated by a pair of skis and a promise of no touching.
Between us we have been married six times, seven if you count one that may have been…never mind, that is a long story.
There have been a lot good times, a few bad times.
Old friends are great.  They are there when you need them.  You can be an asshole and you are forgiven.  You can laugh at stuff with only the slightest mention of an event long past.
Truth be told I don’t have many friends.  When you divorce, the friends either go to the wife, or they slowly just go their own way.  I’ve lost a lot of friends in two divorces.
Old friends don’t leave.  You may not see them often, but they are always friends.
This week is my annual college fraternity reunion.  There will be a bunch of old friends there.  The oldest won’t make it this year, he has other obligations.  We’ll get together soon.
Why am I doing an old friends post?  There is this weeks reunion, but also I have mentioned Frog in the past,  and he recently sent me this picture from a few years ago, so I figured I should introduce him. 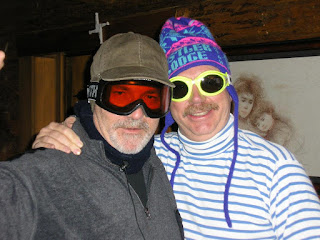 It may have been before our last and final ski trip.  Final, because these old friends are too old to ski.
Frog is the one with the funny goggles.
Posted by joeh at 10:17 PM