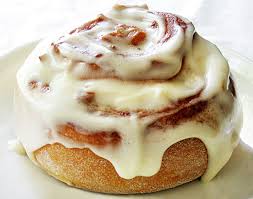 The gamesmanship in the Cranky house is getting out of hand.

The other day Mrs. C brought home three pretzel bites left over from a Little Annie’s take out, and a box of four large icing covered cinnamon buns.

“The left over pretzel bites are for you, and we get two cinnamon buns each.”

The next morning I ate one bun.  It was delicious, but way too big, I should have only had a half.

“I can’t believe you ate one whole bun.”

“I know, I couldn’t help myself, I’m going to eat the other one in halves only.”

“You shouldn’t have either until you finish the pretzel bites.”

“I’m not eating left over pretzel bites when there are delicious cinnamon buns still to be had.”

Yesterday I had one half of a bun with my coffee at breakfast and the other half with coffee after dinner.

“You are supposed to eat the pretzel bites first.”

“What do you mean eat the pretzel bites first?  Like there is a dessert rule?”

“Well I am saving the pretzel bites for breakfast tomorrow now that I had my buns.”

Mrs. C had a half bun after her dinner and then she also took and ate the three pretzel bites.

“What the heck?  I was going to eat them in the morning.”

“They’ve been here for two days, it’s too late, I ate them before they went stale.”

“Fine, then I’m having a half cinnamon bun in the morning.”

This morning after breakfast I looked for the buns to have one half with my coffee.  They were nowhere to be found.  I checked under every towel and all the other usual hiding spots…NOTHING!

“I hate you, I can’t believe you hid the buns, especially after you ate my pretzel bites!”

“I ate them because I knew you were going to have some this morning.”

This was a new one to me.  Mrs. C can be sneaky, she can be playful, she can be greedy, but she has never before been spiteful.

“I can’t believe you, those buns were huge, you could get sick eating both especially after eating my pretzel bites!”

“You had your chance with the pretzel bites.”

I then went down stairs just a little miffed.  OK, I stomped downstairs.

About ten minutes later Mrs. C called me back upstairs.

Oh shit, the four most dreaded words to a husband in every marriage ever!

“I didn’t eat the last buns, I hid them so we could share them after dinner tonight.”

“Oh, thank God! I didn’t mind that you hid them, but eating them? First of all that could have made you sick, and second of all that was just spiteful.  You’ve never been spiteful before.”

“I know, I wanted to surprise you tonight, but I felt bad because you had that hurt puppy dog look on you face.”

“Where did you hide them, I looked all over.”

Oh yeah, she did call me a jerk.