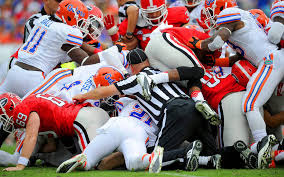 It’s a football story, ladies, nothing to see here.  Except, who knows, you might like it. Naw, probably not…but maybe

Have you ever wondered what goes on in a football pile up after a fumble?

Well, I will tell you anyway.

When the football is loose, everyone dives on the pile to recover it.  The referee can in no way know who has possession of the ball until he removes players from the pile one by one until he can see who has the ball.   While this is going on, players in the pile are trying to rip the ball away from whoever actually recovered the fumble.

About one hundred years ago, while a young Cranky was in Jr. High School, eighth grade for those keeping track, I was involved in one of those fumble recovery pileups.

Actually, I was not initially in the pile up.  I was standing by while the referee was removing players one by one.  While he was doing this, I could see who had the ball, and his jersey color was different from the one I was wearing.

I got down on one knee and slowly worked my way into the pile from the opposite side as the ref.  I managed to slip a hand on the ball, and then another and by the time the referee pulled everyone off I had stollen the ball from its rightful owner.

Many years later, I was telling my eight-year-old son, who was in his first year of Pop Warner Football, about my years ago gridiron robbery.

“Only if you get caught, and then there is no penalty, you just don’t get the ball.”

His very next game, there was a fumble and a large pile up over the ball.  As the referee began to remove players from the pile, my son snuck up, got on his knees and wiggled his way into the pile.  By the time the ref removed everyone, my son had wrestled the ball away from its rightful possessor.  He was credited with the recovery and his team got the ball.

I tell you it was one of my proudest moments as a Dad!