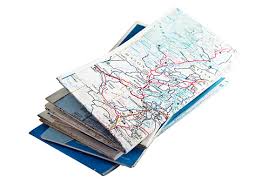 On a recent post involving my issues with Siri and directions, one person commented how she still uses a map.

This had me thinking nostalgically.

Many young people today will never experience the trials and tribulations of road maps.

Every service station used to sell road maps.  Local maps and maps for all the states.  They fit neatly into your car’s glove compartment.  I never understood why it was a glove compartment, it always just held maps.  Should have been called a map compartment.

Those maps were great; if you could read them.  I could never read them worth a damn.  Read them, Hell, I couldn’t even fold them.  My maps were jammed into the glove compartment folded all inside-out and backwards.

Skilled people could follow the roads from fold to fold, and they knew their north from south along with distances based on the map scale.  I was helpless with a map.

I probably inherited my ability from my Mom.

My Dad’s job had him relocated twice in the fifties from New York, to California and then back.  We made both trips by car, a 1951 Buick.

We found our way following multiple state maps crammed into our glove compartment.  Mom was the chief map reader while Dad did most of the driving.  We often took back roads to visit various parks and must-see landmarks along the way.

Mom was not great at map reading.  The result was never pretty.

“What think so? It either does or it doesn’t.”

“Well, Bolderdash Drive is kind of skinny and I 76 is this big thick thingy and it may go over Bolderdash because it looks like there is a bridge or something.”

“No but it is hard to tell, as it gets close, the fold in the map makes it confusing.”

This went on for several miles before Pop would finally pull to the side of the road and snatch the map away from Mom.

There may have been cursing.

Why he never just pulled off the road every time in the first place I’ll never know.

Pop could read a map upside-down and backwards.  He could then flip the thing in the air and after a rhythmic “flap, flap, flap, hand it neatly folded back to Mom.

Years ago, before GPS was common, I used to participate on flyfish trips with friends Frog and Catfish out in Western Maryland.

Frog always carried a huge book of maps of the area.  It was very detailed and a trip would require flipping the pages several times.  Frog and Catfish had been fishing in this part of Western Maryland several times and they knew the area like the back of their hands.  Still, they had to rely on the book and figure out the best route.

They passed the book back and forth all during the trip and argued.

“I’m pretty sure we can take a left at Possum Bluff and save a few miles to the cabin.”

“Yes, but that road is a bit rough after a rain.”

“It hasn’t rained in days.”

“Maybe not at home, but from the looks of the leaves on the persimmons trees it rained here recently.”

(Needless to say, Catfish was an expert at reading nature.)

“Oh yeah, plus that road does not pass the fly shop by Snot Grass Pass.”

“So, we should take the Old Dickweed Road?”

“That’s what I think.  What do you think Hagy?”

“What? I’m still trying to figure out what a persimmons tree is and how the hell you can judge rainfall by the leaves!”

Anyway, that is all I have on maps.  Young people are lucky to be born in a GPS world.

I can’t read a map, but I’m pretty good at listening to and following Siri’s directions. I hardly ever have to pull over and yell at Siri.

Plus, there is now room for gloves in my glove compartment.