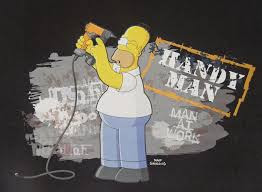 As an owner of a townhome with HOA restrictions, (yes “Cynthia” from that commercial does exist) I have little to say about anything outside of our unit.  This is a bit annoying, but on the plus side I am not particularly handy with stuff so the association does take care of most issues.

We do not have direct access to our garage.  It is attached but not to our unit…anyway we need to go outside in order to get to our garage.  The lock on the garage side-door is difficult to operate in the dark so I leave the garage light on at all times.

So…I bought a gadget with a motion detector that turns the light on at night when it is approached.  End of problem.

Except that the gadget crapped out after a few months.

I know; I could get a good spotlight with a motion detector for a reasonable price, but that would not pass muster with our local “Cynthia.”

All outside fixtures must be of a certain specification.

So…we bought another gadget that is activated by darkness to turn the light on for three hours.  Three hours after dusk is as much time as we may typically need.

After about a week this gadget stopped working.

“Dang it!  We keep buying cheap gadgets to fix our garage light issue and they keep crapping out.  I’m going to get one of those spotlight motion detector things at Lowes.  I’ve installed them before and I know they will work and not crap out.”

“You can’t, the HOA will object and you’ll have to take it down.”

“So, I can’t get in the garage at night without remembering a flashlight?”

“We could get another of those cheap gadgets.”

“This one was working so well, it’s bizarre that it stopped.”

“Before you do, maybe the bulb just burned out.”

That turned out to be a good suggestion.

Like I said, I am not particularly handy with stuff.

There was recently some irrigation work done in our yard.  The workers managed to lower a pipe that our sump emptied into.  This caused the sump discharge to splatter against the house.

Not a big problem, but one I was directed to fix.

The solution was to simply extend the discharge pipe the inch that the drain pipe was dropped.  Not worth explaining, suffice to say I needed to attach one section of PVC pipe to another with a PVC coupler.

Simple enough except I could not believe how tight the fit was.  I could not insert the pipe to the coupler more than a quarter inch.  With the required PVC cement, which sets up almost instantly, I would never get the pieces together.  I spent an hour trying to sandpaper the joints down to make the fit easier.

It seemed to make almost no difference.

I figured that I could use a rubber mallet to quick join the pieces together.

No sanding needed; no mallet needed.  The pieces slide together easy- peasy.

It might just be a good thing that the association is responsible for  most outside maintenance.