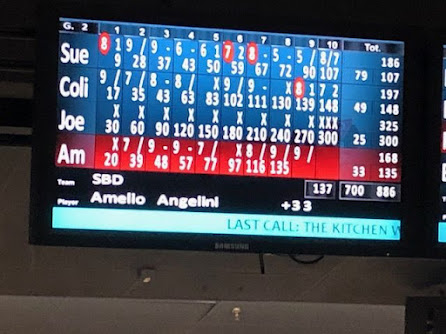 I have been bowling since I was nine years old…65 years (boy am I tired!).  My pops used to take me to the lanes after church every Sunday.

I am a good bowler, but definitely not a great bowler.  In our league of mostly seniors there are at least 15 members with a higher average.  Several of the ladies easily out score me.

The thing about bowling is, even an average bowler on any given game, can bowl as well as a professional.

The ultimate in bowling is to bowl a perfect game, twelve strikes in a row, a 300 score.  Monday night I achieved that ultimate.

Mrs. C says I have been almost impossible to live with since Monday.  I say give me a week, it is for me a once in a lifetime event.

Some of my friends have asked me how it felt to bowl a perfect game.

I don’t know what it is like to win the Super Bowl, the World Series, make it to CEO of a major corporation or win a Pulitzer prize, bowling a perfect game is as close as I will ever come to such an achievement.  So, not as a way of boasting, though I am not above that, I am posting on my one great event.

To put things in perspective, a top professional averages around 220 a game on lane conditions made more challenging than for regular bowlers  (different oil patterns and stuff, difficult to explain and also boring).  My average is around 175, good, but no great shakes.

Bowling is not a complicated game, and like many sports there is an element of luck involved.  Sometimes you can get a strike (all ten pins in one throw) with a horrible shot.  Sometimes what seems to be a perfect throw, leaves one pin standing.  Bad luck…good luck.  To bowl a perfect game you do need some good luck.

I have in the past bowled 11 strikes in a row, but in overlapping games.  Just this year I threw 10 in a row, then left one pin on what I thought was a perfect throw and then struck again, so I knew I could potentially throw 12 in a row.  Doing it in the same game is a different story.

Monday in my first game I threw three shots where I left one pin on what I thought were certain strikes.  It was a bit frustrating.  I was using a brand new ball and considered using my old ball for the next game, but decided to give it just a few more frames.

The first frame was a good shot.  The six pin flipped from the gutter to just trip the ten pin for the first strike.  That is not uncommon on a slightly off hit, maybe fifty-fifty the ten pin gets tripped.  The second frame the ball was buried in the pocket a perfect strike… “ten in the pit” it is sometimes called.  The third frame was another fifty-fifty ten pin trip.

The fourth through the eighth every shot was as they say “buried in the pocket,” perfect strikes.  After the seventh, I was not thinking about a perfect game.  The other team was bowling well and I was just thinking of our team winning the game.  After eight in a row it dawned on me that a perfect game was possible.

I have been asked about how nervous I was on the twelfth strike.  It was the ninth strike where I was the most nervous.  When a player gets perfect to the tenth frame, everyone in the league takes notice and the tenth frame stirs a lot of attention.  I really wanted to be part of that experience just once, even without getting the perfect game.

The first shot in the tenth was a perfect ten in the pit.  I think someone fist bumped me after that one, something akin to telling a baseball pitcher he was throwing a no-hitter,  definitely not proper protocol, but it did somehow relax me.

The building was dead silent.  It is eerie having dead silence while bowling.  The eleventh shot was also ten in the pit.

For the last shot I was feeling the nerves.  I thought of my brother who passed away years ago, and others close to me who were no longer with us, (there may have been prayer involved) it put one last stupid bowling strike into perspective and helped control my heart rate and concentration.

I had only positive thoughts.

Having about forty people, most just casual bowling acquaintances, rooting for you in complete silence was a great feeling.  I threw the last ball in a semi-trance.  It was a perfect ten in the pit.  The forty other league bowlers yelled, they were as happy for me as I was thrilled.  It was fist bumps all around, a very special feeling.

I prepared for the next and last game with a double scotch to calm down.  The first frame was one more strike…13 in a row.

From there I went back to an average once a week bowler.

My fifteen minutes of fame was over,  Mrs. C claims I am still trying to milk it…at least she hasn’t called me a jerk about it.