I do not get it

I do not get it 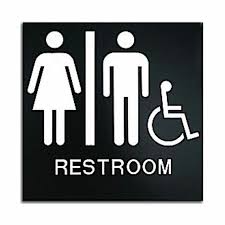 Woke up please Cranky, woke up

Woke up please Cranky, woke up

Went to dinner it hit the spot

I had to visit a pot

Apologies to the Everly Brothers, but a recent restaurant trip had me humming their tune.

While Mrs. C was off visiting Disney World with her kids, I visited friend Frog to attempt to become a guitar picking geezer duo.  We can play, but timing is an issue.

“No no no, you come in after four beats!”

“Pretty sure it is five beats, there are only three beats on the last measure.”

After about three hours of this we went out to dinner.  We went to a nice place in the middle of the local college campus.  After a cocktail and before the entrées arrived I had to excuse myself.

I gave myself a quick perusal and determined I did not have a stick figure skirt, but that was still no help.  Which room do I use, both rooms had the same sign? After much head scratching I figured it didn’t matter.  This must be part of that woke gender stuff I’ve been reading about.

Why don’t they just put up a sign on both rooms that say,

Anyway, I took a chance on door number two for my number one and it was fortunately empty.  It did have a lock which I engaged.

Is locking the door un-woke?  Is un-woke a word?

From now on my dinner will be at “Outback” where I recently learned the hard way that I am a BLOKE, not a SHEILA.