FISHING WITH FROG II Part 3 of 3


Part 3.
Late Friday afternoon we fished the Casselman again.  I was somewhat discouraged by the release of water from the dam, but I still had a rush from catching my only fish of the trip.
Fishing was slow on the Casselman.  Catfish and Marty tried downstream.  Frog, Al and I went upstream.  We found a perfect spot for trout, a deep quiet pool.  There were fish visible all over, but they could not be coaxed to take a fly.  Frog and Al tried everything.  Dry flies, emergers (I’m not sure) and swimmy things.  No fish took the bait.  I sat and watched as I only had dry flies and clearly no fish were rising.
Just before sunset, the action began.  There was a mayfly hatch and fish began to rise for their prey.  I hopped into action and immediately caught a 12 inch rainbow (by next year it will be 14 inches).  Al hooked a nice brown, but lost it trying to give me his camera to capture the moment.  Frog could not get a bite, when I hooked and landed a nice brown trout.
Frog finally hooked a nice brookie and at the same time I hooked another rainbow.  Catching four fish in one day was my personal record and I headed back to the van before something bad happened to ruin my day.  As I left I could hear Al whooping loudly.  He too was on the fish.
I met up with Marty and Catfish who were still on the stream.  I watched Catfish hook and land a 14 inch brown, the largest fish of the day, and he then actually called it quits before the sun completely set.  Catfish and Marty had also caught nothing until the hatch began and the fish started to rise, then Marty caught three; Catfish brought in eight.
Marty, Catfish, and I went back to the van, changed from fly-fishermen to ordinary slobs, and waited for Frog and Al.
Frog and Al did not show up at the car for another forty minutes.  It is hard to leave when the fish are biting.  It was the first time that Catfish ever had to wait for another fisherman to stop fishing!
Saturday we had a quick Mickey Dee’s breakfast and then were off to the Savage River to fish for just a half day.  I was happy with my fish from Friday, and just wanted to go home and sleep.  I am pretty sure Marty felt the same.
The Savage can be a hard stream to fish.  It has large slippery rocks, a fast current and deep spots which can unpleasantly surprise a wading fisherman.  It is a narrow stream so tree snags on casts are hard to avoid.
I only had hip boots.  My waders had felt soles which are illegal this year in Maryland.  Apparently the felt soles can carry a fungus from stream to stream called Didymo, or “rock snot”.  The hip boots are not high enough for the deeper pockets of the Savage, so I found a spot by a large pool where I could fish from the shore and not have to wade at all.
A large brown trout teased my every cast.  I would drop a fly right on his nose and this fish would come up, show me his fin and leave the fly alone.  He did this for three different flies when Catfish showed up to let me know that Marty had enough. It was noon and time to leave.
I told Catfish about the wary brown trout.  He immediately went to work with a fly he said was working downstream.  On the second cast the fish that had been teasing me for an hour was on Catfish’s hook.  Catfish landed the 12 inch brown and we were about to go back to Marty and the car.
Another fish rose to take a real fly from the surface and Catfish started to cast again.   “Don’t you think we should get back?” I asked.  Catfish answered with what I think sums up fishing in general, and fly fishing in particular.
“I guess, but I hate to leave a feeding fish!” 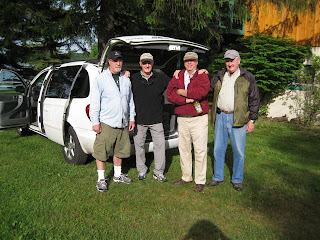 Frog and Me holding up Catfish and Marty 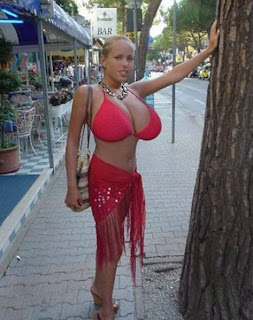 The waitress at "Little Sandy's

for more stuff buy "Maybe It's Just Me"  http://adf.ly/1MJqD
follow on twitter JoeHagyauthor
Posted by joeh at 10:25 PM