FISHING WITH FROG II
Part 2
We fished all day on Thursday and Friday.  By all day, I mean from 9am to 9pm.  There were hours of hiking through brush and trees to a stream and sloshing through streams over slippery boulders and against rushing water.  There were hours of the pure frustration which only fly fishing can deliver.
Catching a fish on a fly is incredibly difficult.  A fly is an insect copy made with feathers, fur, and hair of other animals tied on a tiny hook by thread. The fly is fastened to a fishing leader which is as fine as a spider web. This task alone is nearly impossible for sixty-five year old eyes and slightly arthritic meat hook hands.
On Thursday we fished the Savage and the Casselman Rivers.  I caught only a sore back and an aching hip.  I did have a five inch trout spit out my foam-ant lure.  The adrenaline from this near hook-up kept me fishing for several hours, but was the only real excitement I would have on this day.  Fishing was slow for everyone, but Frog did catch four trout, and Catfish caught ten.
Marty caught his first trout on a dry fly, a ten inch rainbow.  You would have thought Marty had caught a three hundred pound tuna on ten pound test line.  He could not stop talking about how he found the perfect spot, changed his fly to a “little green thingy”, and expertly hooked and landed this giant!  The thrill of your first fish on a dry-fly has this effect on everyone.
Friday took us to the Youghiogheny River.  Catfish, Marty and Al fished downstream.  Frog and I worked our way upstream.  I found a small pool to fish.
Standing/ balancing on slippery boulders, I tied on a fly.  It took ten minutes to thread the line through the eye of the hook.  I then wrapped the line around and around itself, and pushed the end through the loop by the hook.  I then pulled the loop tight, firmly attaching the fly to my leader.  This activity took me at least twenty minutes.  I then clipped the excess line from the knot.
SHIT!! I clipped the line from the fly and not the excess. SHITTY SHIT SHIT SHIT!!!
Twenty minutes later I finished retying the fly to the leader and this time clipped the excess correctly.  Armed for fish I made my first cast.  The result was a tangled bird’s nest slapping the water and scaring away anything underneath.
After twenty minutes, the birds nest was unraveled and I was ready to fish again.  The next cast was successful, but on my retrieval I found a pound of moss stuck to my fly.  After ten minutes I cleared the fly of the moss and I was finally making my third cast.
“Fish on! Fish on!” Five inches of a feisty rainbow trout (well it fought like a rainbow) was hooked, and then it was off.  With adrenaline oozing out of my pores I cast again.  “Fish on!  Fish on!”  It was another five inch rainbow.  This time I hauled the trout in and made a sweet release of a beautiful five inch brown trout.  (It fought like a rainbow.)
Two more casts, and I had another hook up.  This one got away just before I could reach it, but I was on the fish.  I finally had the right fly, the right stream, the right pool and I was hooking fish.  As I was about to cast again, the noise of the stream changed.  Something was different.  The stream looked different.  It felt different.  The current was stronger.
“The water is rising.”  Frog hollered.  Damn, it was rising, and it was rising fast.  Without warning, the powers that be had released water from the dam above.  Frog and I had to wade with great haste over slippery rocks, against a fast current and rising water.  We arrived at the shore line tired and dry, but fishing was over for the day on this river.
This is how hard and frustrating fly fishing can be.  Hours of travel to a stream, hours fumbling to attach a fly to your line, finally finding the right spot, the right cast and presentation; finally actually hooking fish, and someone opens up the damn dam.  Damn!! 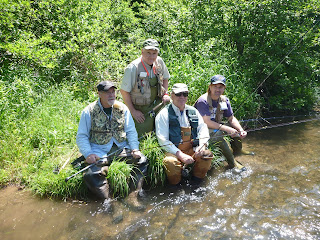 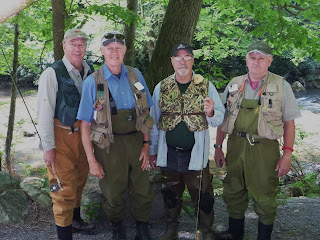 For more stuff buy "Maybe It's Just Me!"  http://adf.ly/1MJqD
on twitter @ JoeHagyauthor
Posted by joeh at 2:02 AM