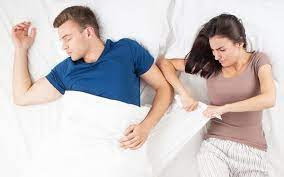 Mrs. C and I seldom fight.  We bicker all the time, but we don’t fight.  There is a difference between bickering and fighting.

There is one area where the bickering comes very close to a fight.

Mrs. C is generally cold.  She sleeps under the covers.  I often stay above the covers while just watching TV.  This inhibits her ability to toss and turn while she sleeps, as the covers will not move.

Eventually when I am ready to sleep, I crawl under the covers.  Apparently while sleeping I will occasionally toss and turn from time to time.  Apparently when tossing, I also pull the covers with me and off Mrs. C.  This generates a waking-up elbow poke and some half-asleep bickering.

“I don’t do it on purpose, I roll over, the covers roll with me.  What am I supposed to do?”

“Stop rolling in your sleep!”

“In order to consciously know not to roll in my sleep I would have to be NOT ASLEEP!”

“Then do what I do when I roll over, lift the covers and roll...Learn to do the Lift and Roll!”

“I do.  I lift them up and roll as the covers settle right back.”

“Once again, in order to consciously do that I would have to be NOT ASLEEP!”

“Well, the alternative is for ME to be NOT ASLEEP when ever you roll over.  You need to learn to lift and roll in your sleep.”

This nightly bickering may soon turn into an actual fight.  Somehow, I am going to have to learn to lift and roll while sleeping.