Coming Soon to a Mall near you

Coming Soon to a Mall near you 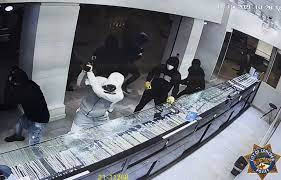 I hope this isn’t considered political as I have sworn off political posts.

Of course, if you comment on anything in the news today, it is considered political.  As a matter of fact, that last sentence is probably political in nature.  It may somehow also be racist.

Anyway, here is my nonpolitical, but probably will be considered political/racist commentary…ok, rant.

Have you seen the smash and grab store thefts in California?  They seem scary to me.  A year ago, I mentioned to someone that these days, if I was a cop and during an arrest the person just ran away, I would do nothing.  There is no way to stop someone from resisting arrest without some action which might comeback to kick the officer in the butt.

If the perp is hurt, the officer is subject to a law suit, losing his job, losing income, losing his privacy, and maybe going to jail.

“Stop right there, you are under arrest!”

“I am going to leave, what are you going to do shoot me?”

“No, only if you have a gun and threaten me, even then, probably no.”

There is no need to defund the police, just make it so they have no real power, and if they do make an arrest, let the perp off with a promise to behave or at most pay a small fine.

The result of police without power or respect, and justice dismissed, is smash and grab robberies where 40-60 youngsters just rush into stores and take whatever they want.

The police cannot do much; store workers are fired, and risk getting beaten up or worse if they try and interfere, so the thieves just get to take what they want and leave.

This is mostly happening now in California.  California is first in lots of things, but rest assured thieves in the rest of the country will figure it out and the smash and grab will be coming soon to a mall near you.

Eventually the malls and stores will just be forced to close and thieves will move on.  Maybe to your car, maybe to your homes.

What is the solution?  Not me, I’ve got nothing.  Any proposed solution will be deemed racist whether we know these thieves’ race or not.  I assume the ability to just take what you want without consequence is appealing to scum bags of all races.

Actually, I do have a solution.  Invest in Amazon stock and home security, lock your car and never leave your house.