Uh oh, this can not be good, not when she calls me Joseph.

“Come here, how did this happen?”

She was in the dining room and one of the windows was smashed.  A rock had ripped through the screen and busted the first pane of the double pane storm window. 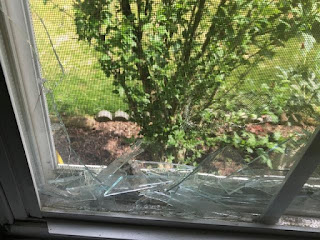 “WTF…I don’t know.  Have you pissed off any local teenager lately?”

Can anyone figure out what happened before I solve the mystery?  I’ll wait.  Anyone…

OK, here it is.  The yard people were cutting the grass this day.  I was pretty sure that the mower had to kick a rock through the screen and the window.  Those blades can fling a rock like a bullet.

“Had to be the lawn mower.  The association should contact them, they will replace the window.”

“We don’t have to prove it, the window was fine yesterday, it was broken today while we were home, and we did not hear it because…the mowers are so flipping loud.”

“I still think we need to have proof.”

The Ring captured the mower making several passes near the window, but we could not see it shooting any rock.

At 1 minute 10 seconds in, there was a slight click sound, barely audible.  At 1 minute 22 seconds there it was again.  We ran the clip over and over.

“Look, at the first click see that leaf move?”

“Yes, but it is way up high.  Unless like the Kennedy thing it is a ‘magic rock’.”

It took three tries for me to see what she was seeing, and the speck was at window level.

“That’s it, but what was the first click, our imagination?”

“Maybe there were two rocks.”

I went out and looked up at where the leaf moved.  Sure enough, the facing up by the roof had a scratch and slight dent.  Nothing worth fixing, barely noticeable, but an explanation for the other click, and further confirmation of our lawnmower rock theory.

Mrs. C sent an email to the association.  She sent a copy of the video, a picture of the broken screen and window pane with the rock still there, along with a picture of the roof facing.  She carefully gave the exact times on the video to hear the clicks and see the movement.

“You know, I’m pretty sure all you have to do is tell them and say you have video proof from our security camera.  You don’t have to send them a copy and give them all the times to check.”

“Yeah, you're probably right, but after all the Perry Mason shows we’ve seen every morning, I just can’t help myself."

I’m pretty sure we will win our case!