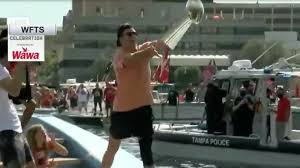 Not sure why, but just recently I was looking back at this year’s Super Bowl and the reaction that the Tampa Bay’s quarterback received for celebrating.

Let me first say that I have not historically been a big Tom Brady fan.   The guy is ultra-wealthy, is married to a beautiful model, and is the winningest football player in history…what is to like.

OK, I may a bit jealous.

Still you have to respect what this guy has done, and he has done it with talent and by working harder than almost any other athlete.

So this 43 year old wins his seventh Super Bowl Championship with a completely new team and he is criticized by some for partying too hard.

Apparently he drank too much!  Hell, he just won his seventh SUPER BOWL CHAMPIONSHIP!  I got loaded celebrating my bowling team winning our first and only league championship.

Further he was criticized for disrespecting the trophy.  A TROPHY!  He has not disrespected other players, other teams, anyone or anything, but he disrespected the one thing he worked so hard to win…A TROPHY!

Let a person enjoy success that was earned, not given.  Like him or not, he deserves respect more than the trophy.

Oh, you don’t follow the sport and don’t know how he disrespected the trophy?

While on his yacht during a Tampa Bay victory boat parade, he tossed the 7 pound silver trophy to a teammate on the boat behind him.  His teammate caught it because these guys are professionals and can catch and throw.

The daughter of the trophy’s designer was horrified that the trophy was disrespected.

What would have happened if the trophy was dropped or damaged?

It is not a one of a kind trophy.  A new replica is given to the winning team every year.  If it was dropped and sank to the bottom of the bay it would have been retrieved or a new one made.  They cost about $10,000.  Tom would have replaced it with petty cash.

It is THEIR trophy! Personally I thought it was pretty damn cool.

Anyway, I am now a Tom Brady fan.  After all, he plays for my team.