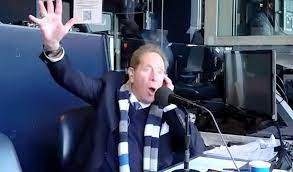 Back from semi-reblogerment with nothing left to say after 11 years of Cranky nonsense, I have to comment on Yankee homerun champion Aaron Judge.

After sitting on a tie for the American League homerun record, Judge hit number 62 last night.

Some say it is the MLB record as previous players who hit 64,65,70 and 73 were all “juiced” with steroids.  I’m not going to get into that argument.  Seventy-three in a season is amazing if they were hit off a tee for crispy sake.

Anyway, my comment is not really about Aaron, it is about radio announcer John Sterling.

Sterling has been doing Yankee games for over 30 years.  He is known by Yankee fans for his annoying home run call,

Often especially annoying on the radio when the call goes,

“It is high, it is far, it is…CAUGHT at the warning track.”

Equally annoying is his penchant for his personalized calls,

“…it is GONE, BERNIE GOES BOOM” for Bernie Williams or

When a game is over and the Yankees win, John wraps it up with

I have listened to many Yankee announcers over the years.  Mel Allen who was often half in the bag by the eight inning was great.  Phil Rizzuto, not particularly professional, but endearing in his own “everyone’s Grandfather kind of way”, and for over thirty years now the annoying John Sterling.

Except at some point, much like Howard Cosell of years gone by, you learn to love hating the guy, and after more years, that slowly turns to love.  He has announcing flaws, and after all these years those flaws are forgiven.

So when Aaron Judge hit his historic “Judgian Blast” I was most interested in Sterling’s call.

Keep in mind John is 84 years old.  I only hope to have his enthusiasm and youthful exuberance if I am still around in eight years.

And hear it is: