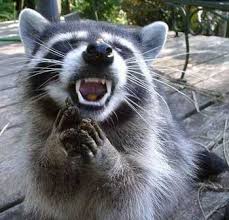 The Cranky’s live in suburbia.  There are some woods and a river a half mile away, but our townhome is in the middle of roads, grass and a few trees and bushes.  It is a pretty area, but seemingly not a place for a wild life expedition.

A few years ago, we had a squirrel family in our eaves.  We got rid of them and shored up their entrance.  It was not that big a deal.  Well, it was a pain in the ass, but it wasn’t scary or anything.

Last year we installed some ring cameras around the home.  We did this as there were some car break-ins and also, attached units can be creepy.  With the ring we know that the sound in the living room is actually the neighbors closing their door loudly.  All our entrances are monitored by the ring.

I know there is the occasional skunk outside.  Not by the ring, but by the nose.  The ring camera once also recorded a fox.

A month ago, there was a raccoon on the deck that set off the ring camera.  It was a cute little thing.

The other week my neighbor told me there was a family of raccoons in his attic.  Climbed up a tree to the roof and made a home in their attic.  They made noise at night and their defecation and urination was making a stink.  Not such cute little things.

The next night there were two opossums on our deck.  I have had them in a previous home basement.  Not such cute little things.  I figured his attic family was actually opossums.

Anyway, the neighbor had Orkin Pest Control come out to rid the creatures.  They could not trap them, but they put a contraption on the entrance that would let them out but not let them back in.  Last I heard they were gone, but the stink remains.

Tonight, I decided to bbq a nice steak.  Mrs. C is at Disney World with her son and daughter-in-law, so I enjoyed a nice bachelor glass of port and a good cigar while warming up the grill.

I finished my cigar and port and left the grill to get the steak.  On my way into the house there appeared a large raccoon right behind me.

Near scared the bejesus out of me.  I yelled and banged the deck floor.  Mr. Raccoon was not bothered in the least.  He did not attack, but he did not back up either.

I have read that raccoons are not to be fooled with.

Plus, they are sometimes rabid…especially if you see them in the day, which this still was.

I scampered inside and slammed the sliding door.  The raccoon seemed interested in the door and what was behind it.  Yelling and banging did not disturb him one bit, which disturbed me a lot!

I closed the blinds and waited for the raccoon to leave.  When I thought the coast was clear, I ran out to the grill with my golfing eight iron for defense…probably should have had a four iron…shut down the grill and dashed back to the safety of my home.  I suspect he was hunkered down under the deck.

I grilled the steak inside on the stove, which set off the smoke alarm for about ten minutes (more excitement) and then finished it off in the oven.

The steak was delicious, but I am afraid to use my deck as I think that is where the raccoon resides.

I need to check with my neighbor for the number to Orkin.

Not to get political, but I never had these problems before Biden was President…well except for the damn squirrels. *

*Just joking, probably not his fault.