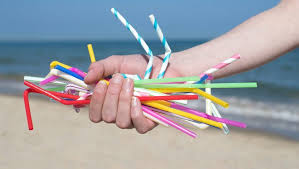 At a local restaurant the other day, Mrs. C had to ask for a straw for her glass of water.  It seems that plastic straws are now a menace to the environment.

Apparently some sixth grader did a class project a few years ago where he determined that the world used 6 billion straws per day and they were destroying the environment.

Personally, I doubt this statistic.  I think the kid misplaced a decimal point and no one checked his work.

But, it seems the straws we use every day, if put together would reach the moon and back.  That’s a lot of straws.  So now, in New Jersey if you want a straw at a restaurant, you have to ask for one.

Personally, I don’t care, I have no use for a straw anyway.  I have not used a straw since I had the flu when I was 12.  I guess a straw helps you to drink without dribbling all over yourself if you are forced to drink lying down.  Otherwise, what is the point?

Have you seen one of those lately?

No!  Perhaps it was a really stupid idea.

Anyway, I don’t use a straw.  The lady step-crank has her own personal reusable straw so she will not be accused of hurting the planet.  I guess that will become a thing.

I’m not sure of the real purpose of a straw.  I prefer just sipping from a glass.  It is especially a New York thing to drink from a straw.

Every New Yorker I have ever known will not drink soda from a can.  They have to drink from a straw.

I have asked these people,

“Why do you have to drink from a straw?”

Every single one has told me the same story.

“I have an uncle who used to unload soda cartons from the rail road cars.  He told me that if you saw what went on with the rats and bugs in those cars you would never drink from a can again!”

I have asked about straw use to at least 17 New Yorkers.  They all have an uncle who used to unload soda from the rail cars.

Now, it seems to me that punching a hole down into the soda can that has been defiled by rodents and insects is just as disgusting if you then dip a straw into the can or if you drink from the lip of the can…but that’s just me.

Interesting enough I have never seen a New Yorker drink a can of beer through a straw.  It is only soda.  Apparently, rodents do not like beer cans.

Anyway, you can make the damn things illegal altogether for all I care, I don’t drink soda and I never use a straw.

Save the planet, sip from the lid.